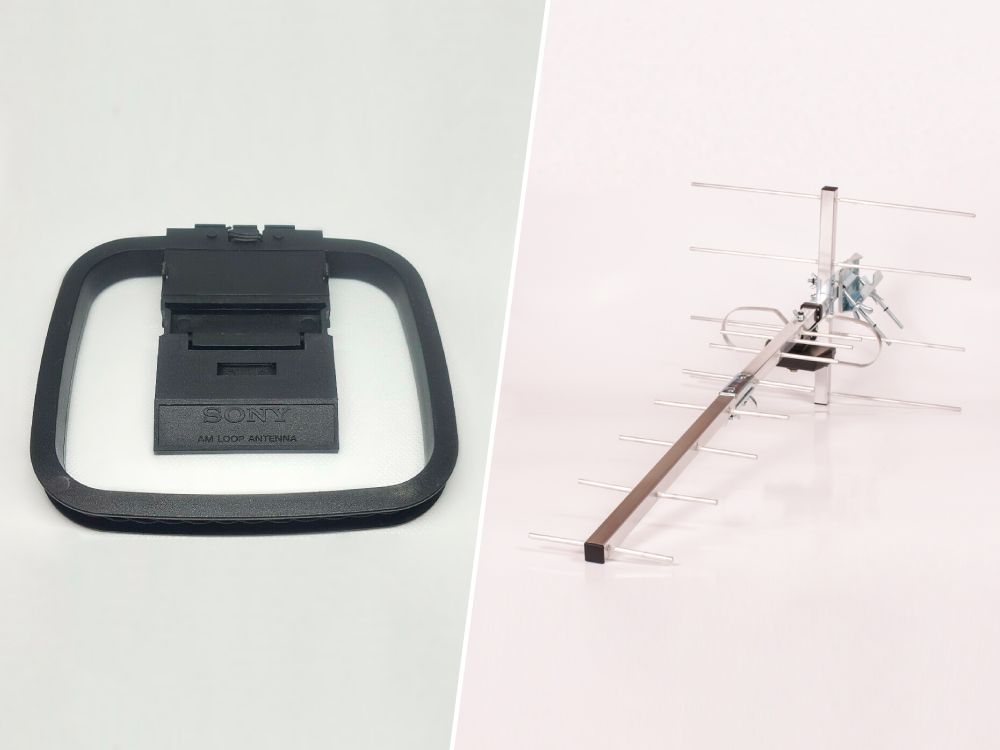 The main difference between a UHF and a VHF antenna is in the way it’s designed to each receive a specific frequency band:

Nowadays TV antennas are rarely VHF only. Modern antennas will often receive some combination of both VHF and UHF — or they’ll be UHF only (the latter category includes indoor antennas).

So will you need to receive VHF or UHF channels? That’ll depend on your local TV signals of course — on which frequency bands are your area TV stations broadcasting?

Below I explain more about the differences between the two types of antennas, and how to determine which type you’ll need in order to enjoy free, over-the-air (OTA) TV.

UHF vs VHF: Which is Better?

You might remember the days of analog television, before the transition to digital TV (DTV) in 2009.

Back then, most TV stations broadcast on the VHF band (broadcast channels 2 – 13) because those lower frequencies generally provided clearer reception over a limited distance than the higher frequencies (UHF) at the time.

As well though, you used to get a snowy picture for no apparent reason with VHF. Either that or the image got all distorted when someone nearby decided to use an electric appliance (ugh!).

Most local TV stations used to be located on a single-digit broadcast channel of the VHF band, and many retain that same channel today as a virtual channel for branding reasons, even though their current UHF broadcast channel is now double digit.

Digital TV changed the game, however, by introducing compression techniques and error checking, which provided high-quality reception with superior image and sound.

DTV was easier and more efficient to encode using higher UHF frequencies, so most stations began broadcasting on the UHF band (broadcast channels 14 – 36).

As well, UHF proved its mettle in dense, urban environments, since its shorter and higher-frequency wavelengths were better able to penetrate common household barriers like metal window frames and doors.

In today’s DTV world, TV stations can pack more programming and channels into a signal using UHF. The higher frequencies and shorter wavelengths of UHF also mean that modern antennas tend to be smaller than their analog TV versions.

Not all TV stations are broadcasting on UHF though: some still broadcast on VHF (e.g., PBS in many markets), and others have moved to VHF as a result of the 2020 channel repack.

In fact, in most places you’re likely to find a mix of UHF and VHF signals, with the majority being on UHF.

As mentioned earlier, TV antennas today tend to be UHF only, or receive both UHF and VHF bands.

Antennas consist of elements such as dipoles and reflectors that receive TV signals and convert these into electric current for input to your television or other audio visual equipment. In some antennas (like indoor antennas) these elements aren’t visible since these are encased in a plastic exterior.

The length of an antenna dipole will usually be in some proportion to the wavelength of the signal the antenna is designed to receive.

As VHF radio signal wavelengths are longer than UHF wavelengths, it follows that dipoles designed to receive VHF signals are generally longer than those receiving UHF signals.

An example of an antenna designed to receive signals in the VHF band is the “rabbit ears” antenna that was especially popular in the days of analog TV.

It sat atop your television and featured two telescoping dipoles, whose positions and lengths you hastily rearranged in order to get a clear picture when “Magnum P.I.” came on. (The round part of the modern rabbit ears antenna below is for picking up UHF.)

The dipoles of many rabbit ears antennas reach well over three feet when completely extended, enough to pick up many VHF frequencies when these came in clear and interference free.

And this is just as well, since the wavelength of the lowest VHF frequency (broadcast channel 2 at 54 MHz) is around 18 feet.

An antenna dipole wouldn’t need to be that long to receive the signal but need only be a proportion of that length — but still, it would be several feet long.

By contrast, the highest UHF frequency (broadcast channel 36 at 608 MHz) has a wavelength of around one-and-a-half feet.

When comparing VHF and UHF antennas, the lengths of the various elements make it readily apparent which frequency bands they’re designed to capture:

As already mentioned though, many outdoor antennas today receive some combination of both bands. These are typically the UHF band and the so-called high VHF band (broadcast channels 7 – 13).

The elements on such combination antennas are often arranged to optimize gain and improve signal reception on multiple frequencies.

Two types of TV antennas not depicted above are the box-like indoor antennas as well as bow tie antennas, both of which are typically UHF only.

Look at the product description or box your antenna came in to find an indication of whether it gets UHF, VHF, or some combination of both.

This is especially important, as we’ll see, because you’ll want to choose the appropriate antenna for the signals that are being broadcast in your area.

Should You Get a UHF or a VHF Antenna?

The best way to find out which TV frequency bands are prevalent in your locality is to head over to the RabbitEars website, enter your zip code or address, and view the station result list.

TV stations are listed by their broadcast channels, which correspond to UHF and VHF frequencies. If you notice that stations in your area are broadcasting on both bands, you may consider getting a combination UHF/VHF antenna.

On the other hand, if you’re less than 15 miles away from TV stations, then perhaps a UHF-only indoor antenna will suffice.

If an antenna’s elements are visible, it’s relatively easy to tell whether it’s a UHF or VHF antenna: elements on a VHF antenna are typically longer than UHF elements, since they’re designed to capture the longer and slower waves of VHF radio frequency signals.

Indoor TV antennas are generally designed to capture the UHF band only, while outdoor antennas usually capture both the UHF and VHF frequency bands.

The antenna’s product manual and box will indicate which frequency band it receives, but before buying a new antenna you should first determine which TV signals are being broadcast in your vicinity, to make sure you’ll be able to receive them.

Who Can I Hire to Install a TV Antenna?

I think it’s okay that FCC takes away some channels if it means better cellphone signals and connectivity.

No argument there. It’s just that some compromises were made and for example there are now less physical channels available for TV broadcasts. This hasn’t had a big impact so far, but may cause some issues down the road with the rollout of Next Gen TV. But we’ll see.

Is it better to just get a rotator so I can rotate my antenna if I want a VHF then afterward a UHF?

Hi, if your antenna is dual VHF/UHF, then yes.

Hello, I’m trying to have CBS station thats over 90 miles away from here, I’m thinking of using two antennas, one Omni directional and one super high gain directional to get the CBS channel. Any suggestions on a UHF directional antenna that might be able to receive signals from 90 miles away? I would really appreciate that thanks.

You’ll definitely want to consider a long-range directional antenna (I hope the terrain and lack of local interference factors support your desire to pick up broadcasts from 90 miles away). I normally recommend the Winegard HD8200U; take a look at the size dimensions before buying it though – it’s pretty big but should fit on your roof.

Here in my area BBC is the only VHF station. I have an attic antenna and everything else comes in very well. When I search for VHF antennas I keep seeing marine radio ones. If it has the right connections could I use this? Is it likely to be better than the VHF element on my antenna now?

To generalize, a VHF antenna would probably get better reception for that VHF station. But then you would miss out on UHF stations. It sounds like the VHF element isn’t working on your antenna? In that case I would consider replacing your attic antenna with a Winegard HD7694P, a dual frequency antenna that gets better VHF than most.

What would be a good antenna that would allow me to get the UHF channels and VHF (WXIA and WPB)? Prefer indoor but attic could be an option also. Thanks!

Actually VHF is STILL the best frequency for long range reception and they still broadcast 1080i pictures just fine.
UHF signals have more than twice the path loss so they need high gain antennas to cover the same distance.
And VHF signals can bend around objects and penetrate trees that would block UHF signals.